Sickness has a way of hitting life unexpectedly. 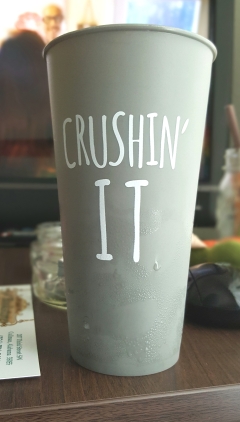 Life moves by so quickly that we all lose track of it. About three weeks ago, life slowed down. During my regular Wednesday night class, I had a hard time breathing. By the time I arrived back at my room, I had what I thought was a full blown panic attack.

Dizziness, chest pain, fever…all that stuff. I’m a natural-born worrier, so I thought I’d sleep it off and feel better in the morning. The next morning came, and my chest hurt worse. After mucho googling, I decided I either had Lupus or was in the midst of a heart attack.

I decided to make a trek to the Student Health Center. Luckily, though I felt like it, I didn’t pass out on the bus. After walking to the center, my blood pressure was insanely high, and my pulse beat like a full on rave. An imaginary ton of concrete sat on my chest. I learned my first lesson about doctors and nurses. They move like jack rabbits when you tell them your chest hurts and you can’t get a good breath.

The first doctor, though worried about my condition thought I might only have a sinus infection. My high blood pressure concerned her, but it seemed to be on the way down. Then, not wanting to leave and have a heart attack, I asked her when I should come back if that was the problem. To be safe, she decided to have an EKG done. That’s when life crawled into one of the whirlwinds that seem like a second and years all at once. Slow, but insanely fast.

My EKG showed an irregularity. Well, the first doctor brought in her supervisor doctor, and he was so concerned that he drove me to the hospital himself in his truck. I guess they don’t get much excitement in their office since they treat mostly undergrads.

On the way to the hospital, all I could think was that I was going to die alone. I actually live in the next state over, and commute to school for the week. My family lives three states away. But that’s another story.

I texted my husband, and he immediately left work and made arrangements for the dog, so he could come screaming down the highway to get to me. I also texted my sister to use her as the communicator to the rest of my family.

The ER was ready for me when I got there and began tests as soon as I walked back to a triage room. They ran every test possible on me. Another EKG, triponin, d-dimer, ct-scan, urinalysis. All of this is going to be so fun to pay for, but I’m glad they ran all those tests. The waiting for the results is what was really scary.

I sat in that room and thought about all the things that mattered to me. Not stuff, just people. I wanted more than anything to have someone there with me. I did not want to die along. I did not want to have surgery along. Because that’s what I thought was going to happen. My sister kept in touch with me through text throughout the entire ordeal. I don’t know what I would have done without her.

I also talked to God; I listen to God quietly every day, but I usually only ask for his forgiveness. This time I asked for his mercy and guidance. I didn’t ask for him to save me or to make me better. Instead, I asked him to give me strength to face whatever he had in store for me. It’s not what we want, but what suits his purpose.

After hours of tests, turns out I did have something wrong, but not with my heart. The lymph nodes in my chest were swollen and pressed against my bronchial tubes obstructing my breathing. I also had a touch of pneumonia on the insides of my lungs. They were really glad that I came when I did so that it didn’t turn into full blown pneumonia. My largest lymph node was swollen to 14mm.

At discharge, I walked from the ER with lots of paperwork, two bruises from IVs, and five prescriptions. But I had to call a friend to come pick me up. Thank goodness she only lived a few minutes from the hospital. My husband was at my apartment soon after I arrived. He drove me home. That’s all that mattered.

My breathing is better now. I have energy that I didn’t realize I had so gradually lost being sick. I didn’t really feel that sick until my breathing became difficult. I’ve learned to take care of myself and to listen to my body. I’ve also learned who I can really count on in a situation like this. I’ve learned who really cares about me, who doesn’t care, who doesn’t have bedside manner, who blames me for my own illness. I’ve also learned to treasure the days I have on this earth.

Sickness reveals the best and worst in people.

Judgment
When you celebrate an idol's bday with your daughter... Sid said I made the moment weird. Conner said he wasn't celebrating anyone, but he was there for the cake.
The kids and I have started writing letters each year. They write to their future selves, and I write to each of them. When they turn 21, they get to read them. It is a way for them to see their growth, and also a way for me to talk to them.
When you wake up from a nap at my house...
Sid and I have completed the Target Clearance run. This is what I am surprising myself with next year when I open up Christmas decorations.

Road to Revision; or, Good Writing Habits are Hard to Develop

I was #Crushin’It…until I wasn’t